Luxury handbag with a handwritten letter of Charles Dickens

The limited edition „Christmas Dream No. 1“ includes a total of only 24 bags handmade in Germany. In a concealed section, each bag encloses a genuine piece of a handwritten letter of the famous English writer from the year 1851. We cut this rare artefact into pieces under the supervision of a notary, sealed them in acrylic panels and worked them into our luxury bags. Each bag comes with a glossy photo of the complete original document.

The world-famous author Charles Dickens was raised in poor conditions. Social hardships and injustices that he had to experience in his childhood shaped his lifelong view of the world. That is why he spent his life campaigning for the rights of the poor and children, for education as well as for social reforms.

‚The Early Closing Association‘, founded 1842 and based in London, aimed to reduce the hours of employment in industrial life, which included manufactures, offices, banks and the wholesale trade. Hugh Evans, a representative of the Association from Bristol, had asked Charles Dickens for support in their activities.

In his letter of March 03, 1851 the author responded with a polite refusal:

„….I regret to say, …..my engagements preclude the possibility of ….complying with the request of The Young Mens' Early Closing Association of Bristol..“. 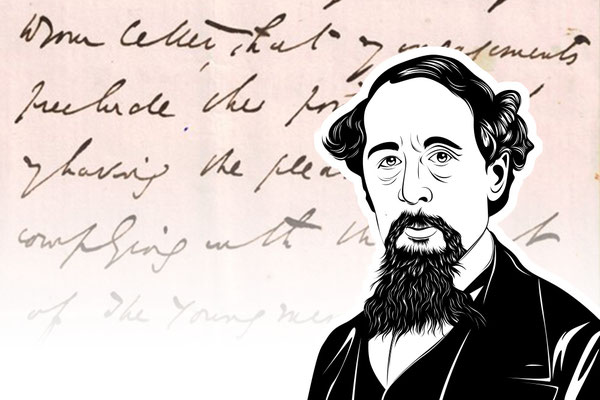 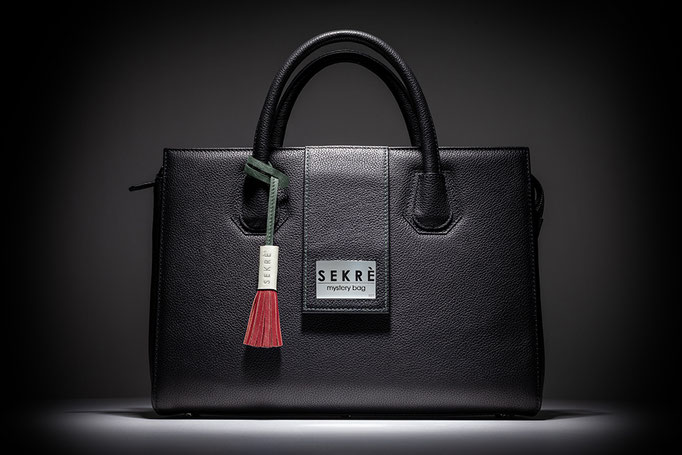 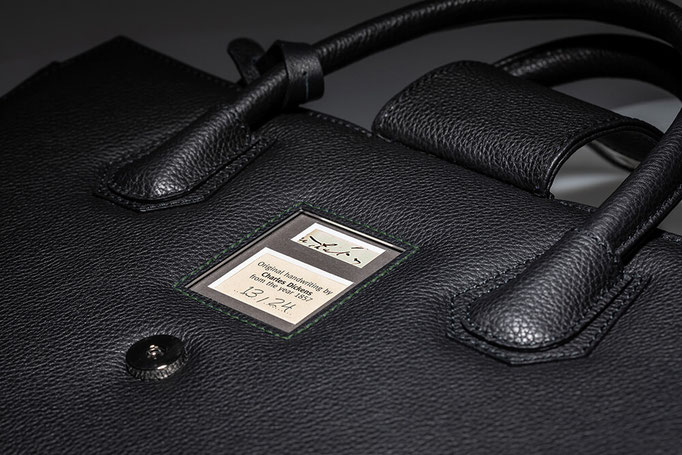 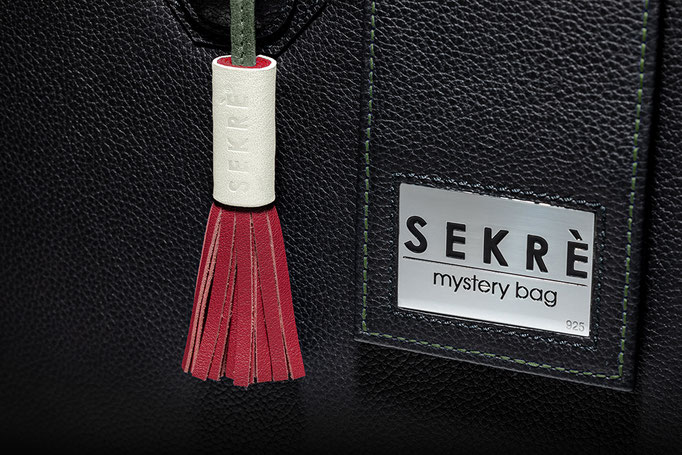 Charles Dickens is regarded one of the greatest novelists in the history of literature. He became a hugely popular public figure already during his life time. Most of his books are considered masterpieces, his novels and short stories are still widely read today.

Dickens grew up in abject poverty and was not formally educated, however, that did not stop him from becoming a writer. He produced a staggering amount of work during his career, which included a total of 15 novels, plenty of short stories, articles and shorter novels. They have been adapted continually for the screen since the invention of cinema, with at least 200 motion pictures and TV adaptations based on Dickens's works documented.

He created some of the world's best-known fictional characters and is regarded by many as the greatest British novelist of the Victorian era. Dickens' most popular works include 'The Pickwick Papers', ‘A Tale of Two Cities’, ‘David Copperfield’, ‘Hard Times’, ‘Oliver Twist’, ‘Great Expectations’ and ‘A Christmas Carol’ among others. His works contain a huge  number of autobiographical features.

As a social critic, he campaigned vigorously for children's rights, education, and other social reforms all through his lifetime.

In his early childhood, the family struggled with financial difficulties. When Dickens' father was imprisoned for debts in 1824, his mother also moved into prison with the youngest of the seven siblings, which was customary at the time. The 12-year-old Charles was accommodated by a family friend and had to work early to contribute to the family's living.

Under deplorable conditions and paid miserably the young boy, like many other poor children, worked in a warehouse and as an unskilled labourer in a shoe polish factory. So Charles could only attend school irregularly. These early years of privation left a lasting mark on Dickens's view of the world and were the later subject of several of his novels.

In 1827 Charles succeeded in being employed as a clerk by a lawyer. With tremendous diligence and ambition, he worked his way up to become a parliamentary reporter.

'Sketches by Boz‘ and early novels

At the age of 22, Dickens worked as a political journalist in the English House of Commons, reporting on parliamentary debates. He also travelled around Britain to cover election campaigns for the newspaper 'Morning Chronicle'.

His journalism, in the form of sketches, formed his first collection of pieces, published in 1836: ‘Sketches by Boz’ - Boz being a family nickname he employed as a nome de plume for some years. Dickens apparently adopted it from the nickname ‘Moses’, which he had given to his youngest brother Augustus. ‘Moses’ became ‘Boses’—later shortened to Boz.

The success of 'Sketches by Boz' led to an offer from a publishing house to supply monthly texts for illustrated serial stories. Dickens wrote a continuous series of short texts, the resulting story became known as 'The Pickwick Papers'.

Almost all of Dickens' novels were initially published in monthly or weekly sequels, which became trailblazing for the serial publication of novels. 'Cliffhanger' endings in each episode kept his readers in suspense.

The serialised format also allowed Dickens to respond to his audience's reaction as the plot progressed. This made him reach a whole new class of readers, namely the masses of illiterates who eagerly spent their "ha'pennies" on each new episode.

'Oliver Twist‘ – a child as hero of a novel

The book shocked readers with its depictions of poverty, exploitation through child labour and child criminality. At a time when Britain was the most important economic and political power in the world, Dickens cast a harsh light on the lives of society's disadvantaged. After the novel was published, the Poor Law was discussed for the first time and successfully changed.

Young Queen Victoria found 'Oliver Twist' and 'The Pickwickers' so captivating that she stayed up until midnight to read them.

In 1843 Dickens started to work on the first of three Christmas tales. 'A Christmas Carol' became the most popular of them, it was later filmed a number of times.

The story is about a money-lender, Ebenezer Scrooge, a grumpy old miser, who is visited by three ghosts in his dream in one single night: the ghosts of Christmas past, present and future. This dream eventually causes him to fundamentally change his life - old Scrooge subsequently transforms into a kind and charitable person.

The tale again has strong undertones of social criticism. The idea of the plot came about during a trip to Manchester, where he took a close look at the living conditions of the local working class. The dire conditions he found there prompted Dickens to strike a "sledge hammer blow" to draw public attention to the situation of the 'working poor'.

The first edition of 'A Christmas Carol' was published on 19 December 1843, it was already sold out on 24 December. By the end of 1844, another 13 editions were in circulation.

The novel 'David Copperfield' (1849/1850) in particular reveals many autobiographical features. Dickens himself considered it his favourite literary child: "I am a proud parent to every child of my fancy ... but ... I have in my heart of hearts a favorite child, and his name is David Copperfield“.

The story: The orphan David Copperfield is forced to work in a factory from the age of ten, misery and exploitation characterise his everyday life.

David finally manages to flee to his Aunt Betsey, who takes him in kindly and arranges a good education for him. Like his alter ego Dickens, he later becomes a paralegal, a reporter and finally a successful writer.

'David Copperfield' is regarded one of the most important childhood and youth novels in world literature.

Dickens‘ biographer Claire Tomalin calls him the greatest creator of characters in English poetry after Shakespeare.

Bis novel characters are among the most memorable in English literature, mainly because of their typically whimsical names. Ebenezer Scrooge, Tiny Tim, The Artful Dodger, Fagin, David Copperfield and Uriah Heep are so well known that they have become part of British culture and in some cases have passed into everyday speech.

A 'scrooge', for example, is a miser - or someone who doesn't like Christmas.

The name 'Uriah Heep' has become a byword for a falsely humble hypocrite, characterized as an unctuous villain in the novel David Copperfield. 'Uriah Heep' is also the name of one of Britain's leading hard rock band.

An international show star, David Seth Kotkin, is considered one of the greatest illusionists of our time. He is known by his stage name 'David Copperfield'.

One 'character' vividly featured in his novels is the city of London itself. Dickens called London a 'magic lantern' that inspired the places and people in many of his novels.

Charles John Huffam Dickens died at his home near Rochester on 9 June 1870, aged only 58.

Contrary to his wish to be buried at Rochester Cathedral "in an inexpensive, unostentatious, and strictly private manner", he was laid to rest in the Poet’s Corner of Westminster Abbey in London. Only most distinguished English poets, playwrights and writers were buried there.

An obituary published at the time of the funeral bore witness to the high esteem in which the deceased was held:

“To the Memory of Charles Dickens (England's most popular author) who died at his residence, Higham, near Rochester, Kent, 9 June 1870, aged 58 years. He was a sympathiser with the poor, the suffering, and the oppressed; and by his death, one of England's greatest writers is lost to the world.”

Dickens himself would probably have commented as follows: "Do as much good as you can, and make as little noise about it as you can."